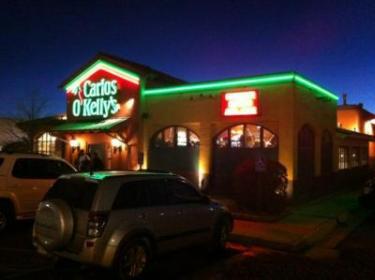 Below is a news story that ran on Kansas.com and KAKE10 referencing the recent change-out of neon to LED at a Carlos O'Kelly's in Wichita, KS by TriMark Signworks.
While "going green" has become a trend in the last few years, saving money is trend that will never go away. Here are some numbers: by changing their neon signage and accent borders to LED Carlos will reduce their signage energy consumption by 77%. In dollars per year, it will cost approx. $1.31 v. $5.52 to power one linear foot of LED compared to neon respectively.
The above referenced savings do not include anticipated reduction in maintenance costs, and reduced building insurance premiums (less fire danger with LED compared to neon). Are you ready to save some money? If yes, give TriMark Signworks a call.

Start News Story:
Thursday, February 03, 2011
Carlos O'Kelly's has made it a priority to be environmentally friendly and reduce energy consumption.
The most noticeable effort occurred last Thursday at their 29th and North Rock Road location in Wichita. The restaurant replaced all its neon signage with new ultra-thin LED rope lighting.
Jon Rolph, Executive Vice President at Carlos O'Kelly's says the new lighting will reduce energy costs by 77% each year. Rolph says the restaurant had a total neon recall, replacing all neon banding and two signs. The investment cost $24,000. "If it works, and we expect it will, we look forward to putting the energy-saving LED rope lighting in all 47 of our Carlos O'Kelly's," Rolph said.
The sign replacement did cause some concern. "We had people coming inside the restaurant last Thursday and ask if we were closing," Rolph said. "We were fortunate that TriMark Signworks was able to complete the job quickly. If you drive by the restaurant today, you wouldn't notice any difference in how the signs look."
TriMark Signworks is a Wichita company that last year helped the city "go green" by designing and fabricating the new solar-powered bus shelters used in the Douglas Design District. This is their first project with the new thin LED Rope lighting. Carlos O'Kelly's is believed to be the first Wichita-area restaurant to replace all its neon signage with the new energy-efficient LED.
This is the third "green" initiative for Carlos O'Kelly's in the last few months. Less noticeable, but just as important are the internal decisions to switch their carryout bags and payroll system. Customers who carry out Carlos O'Kelly's food are now doing so in a bag made of tapioca instead of plastic. The new bag will biodegrade in only 12 weeks. Also, the 4,500 Carlos employees no longer receive paper paychecks. They instead are paid with renewable pay cards. Both the cards and the carry out bags are system-wide efforts.
Courtesy KAKE.com